This was another somewhat low-key week as Ty continues to adore his other works, but I feel like the new activities that we have done has been a big hit. As John Bowman would say in his book Montessori at Home, I've found his "sweet spot" for sure! 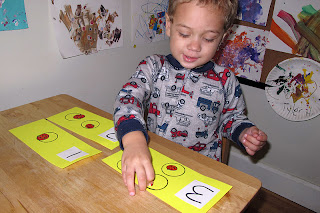 This activity is very similar to his Sandpaper Numeral Counting Boards. I feel like he's ready to move on from 1-3 to 4-6, but want to do a few more activities with this quantity to really nail the idea home for him. Here his work was to place one pumpkin sticker in each circle, which matched the number on each card. 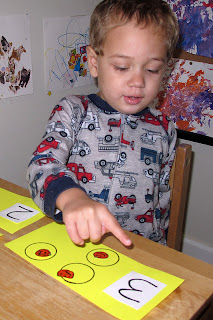 He really enjoyed this, counting each sticker as he stuck them and sometimes pointing at the number. 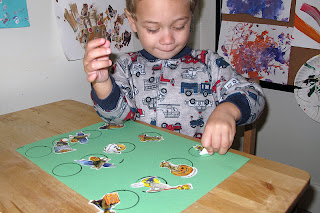 He enjoyed this circle/sticker concept so much that he wanted to do more. I quickly traced a bunch of circles onto paper and gave him some Halloween stickers with dogs and cats dressed up in costumes to put in them. I would have planned the circles better if I had more time, but I didn't want to lose him! 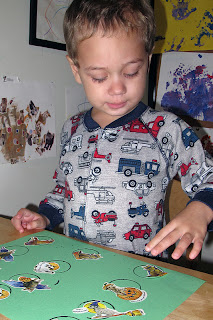 Counting of course! Ty really adored these stickers. He is in a huge "pets" phase. He wanted both the pumpkin counting sheets and the animal stickers to be hung right next to his table and counts/talks about them often during snacks and meals. Some of the animals stickers are the same so he enjoys finding the matches. 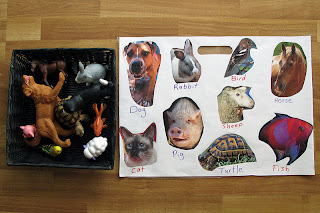 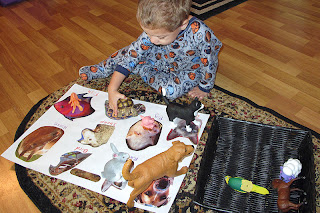 I finally made Tyler a new animal matching sheet! He has has a big laminated (with contact paper) two-sided sheet of paper with animals cut from magazines on it since he was a baby. Though I thought he'd love it, he just didn't care about it back then, but became briefly interested in matching animal figurines onto it a couple months ago. Trouble was we didn't have many animals to match it to, and even now, we don't have them all, and that's just not very Montessori. So I made him a new one with all of his favorite figurine animals on it last night. He was thrilled to see it this morning and to do the work! 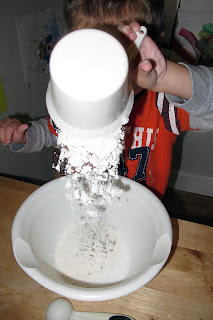 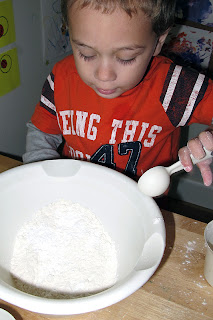 I've been waiting a long time for a rainy day so I could make play doh with Ty. This week some rain finally arrived! A reader and follower on my Facebook page gave me this recipe and it worked beautifully!
2c plain flour
4tbs cream of tartar
2tbs cooking oil
1c salt
2c boiling water
food colouring
Mix dry ingredients into a bowl.
Add colouring to boiling water, then mix into dry ingredients.
Store in the fridge. 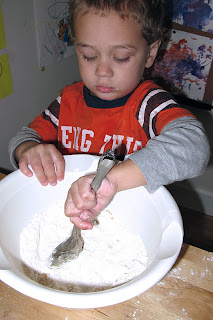 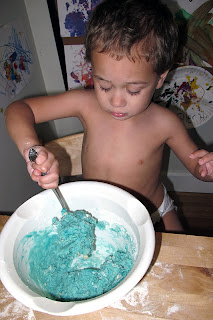 Ty really got into this, and I love how he was able to see how each ingredient came together to make play dough! The only thing I didn't let him do was to pour the boiling water or stir when it was burning hot. 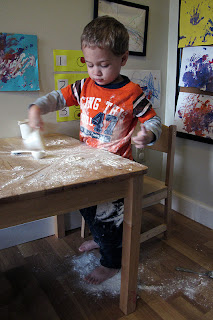 While I handled the water, Ty played with flour on his table. 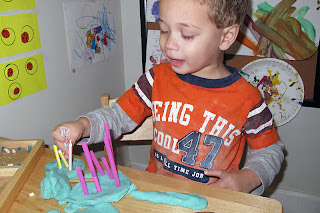 Time to play! Making "birthday cakes" and worms! It was heavenly to play with the dough when it was still nice and warm. I've heard of warming play dough up in the microwave so I'll have to try it... 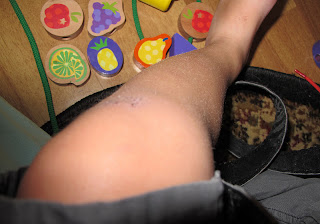 Ty had become interested in the act of taking pictures lately (wonder why with Mama chasing his cute little face around with a camera all of the time...) and wanted to take a photo. I wasn't about to let him hold my somewhat expensive Canon by himself, so I helped him hold it. He decided to take a picture of his healing skinned knee. He is a bit obsessed with "boo-boo's" lately! I'm think I'm going to look into a real but child safe camera for Christmas. 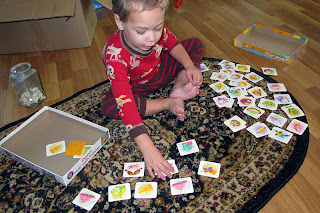 When looking through one of my storage boxes to get a coin box he requested, Tyler spotted his Memory game. I usually only keep eight cards out at a time for our games, but he insisted on matching them all (face up). It took a while but I was impressed with how well he did! I think we'll do more of this soon. 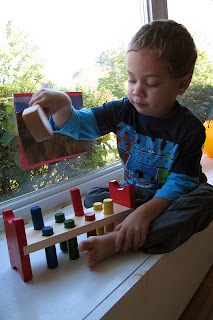 He also found his peg and hammer toy from Melissa and Doug in the box. He has had this for 10 mos and never wanted to do it. Now is just the right time for it apparently because he has been all about it! Maybe I need to let him rummage through my toy and material storage boxes more often... 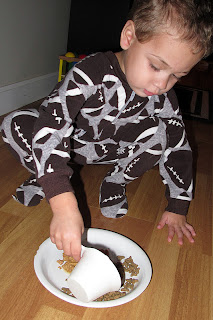 We recently switched our cats from a wet food only diet to a mix of wet and dry, so now it's easier for Ty to help feed the kitties. He really enjoys this and I've watched him hang out to watch them eat with a rather proud and interested look on his face! 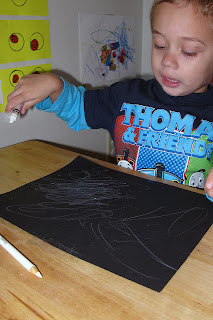 We did some simple black paper with white crayon and white pencil drawings. 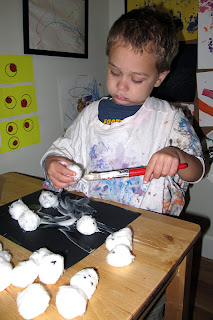 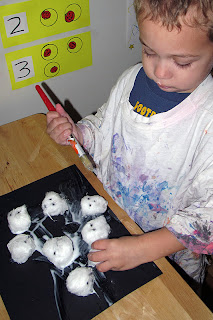 We also did a "craft" I guess you could say, though I'm kind of against them. My original idea was to have him glue cottons balls onto blue paper and maybe have him puff them out a bit to pretend they were clouds. Then I realized that with a little imagination and dotting eyes on with marker (done by me), they could look like the ghosts that he's so into from one of his books (as well as make it a more seasonal activity). It went well, though even spreading glue with a brush his fingers got all sticky and the cotton balls tended to stick to his fingers, which was frustrating for him. A glue bottle may work better.
We played a fun gross motor game we did as well, but I'm going to save it for a future post. This will likely be my last big, whole-week post like this, as I've decided to go with one-activity posts for a while!


Linking up with Living Montessori Now, Tot School., The Imagination Tree and No Time For Flashcards!
Posted by Jen at Monday, October 17, 2011 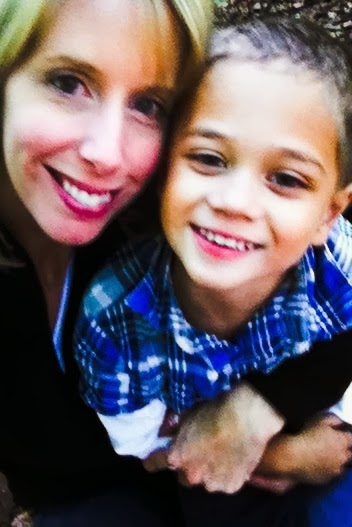